WHAT IS NITROUS OXIDE?

Nitrous oxide – commonly known as “Laughing Gas”, NOS, nitrous or nitro, is an odorless and colorless gas. When the gas is inhaled it produces feelings of euphoria, giddiness, and relaxation, and can cause auditory and visual hallucinations. If no more of the gas is inhaled, the effects disappear after a couple of minutes. In the late 1700’s the substance was used as a source of entertainment at social gatherings of the upper classes in Europe – enjoyed for it effects of making partygoers dreamy, sedated and often break out in laughter. In the 1844, nitrous oxide was first used in a dental extraction procedure and found to be effective as an anesthetic for dental and medical procedures.

Nitrous oxide still used today as an effective anesthetic for medical and dental procedures, because of it’s common usage in the dental and medical fields, the question often arises as to whether the substance is actually legal. 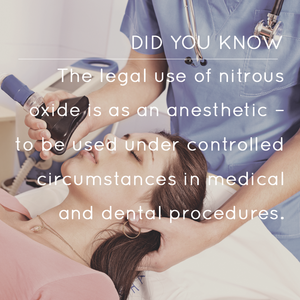 The majority of the states in the United States have definite laws concerning nitrous oxide and similar substances. These laws state that it is unlawful to possess or sell nitrous oxide for the purpose of inducing an intoxicated state (by inhaling it). These laws also state that it is unlawful for nitrous oxide to be sold to any person under the age of 18. The violation of these laws is usually classed as a misdemeanor and involves the payment of a stiff fine. The legal use of nitrous oxide is as an anesthetic – to be used under controlled circumstances in medical and dental procedures. However, despite the legal restrictions, this substance continues to be used by individuals recreationally to obtain a so-called “legal high.” The important thing to remember is that nitrous oxide is a drug, and that this drug has certain effects upon the human body. While the effects may be entertaining, there are other effects and consequences resulting from the use and over-use of this drug that can be very harmful when used outside of the controlled, supervised environment of a medical or dental office.

WHAT ARE THE RISKS AND DANGERS OF NITROUS OXIDE?

The outward symptoms that occur shortly after a person has inhaled nitrous oxide are a feeling of euphoria and relaxation, spatial and time disorientation, an increased pain threshold, auditory and visual hallucinations, and a lower voice pitch (the opposite of helium). All of these symptoms are combined with a loss of motor control. Consequently – due to the loss of motor control, a person on a nitrous oxide “trip” is in serious danger of falling unless he or she is sitting or lying down.

Prolonged use of nitrous oxide, or several repeated inhalations of the drug, can result in more serious consequences. Since the effects of the drug wear off so quickly, a user is tempted to inhale the drug several times in rapid succession. Due to the very low percentage of oxygen in nitrous oxide, repeated use can result in oxygen deprivation, resulting in irreversible brain damage. The gas is extremely cold in its natural state, there is the danger of frostbite to face and lungs in users inhaling nitrous oxide directly from a tank. Nausea and vomiting can also result from use if the user has recently eaten. Tests have also shown that prolonged use of nitrous oxide can deplete the body’s production of Vitamin B12, which can result in brain and nerve damage. Nitrous oxide interferes with folic acid production, tests have confirmed the risk of severe malformations in infants born to mothers who inhaled the drug regularly during the early stages of pregnancy. Finally, cases of psychological and physical addiction to nitrous oxide have been recorded, if you or a loved one is suffering from an addiction to nitrous oxide, an ARISE® Drug Intervention can help your loved one on the road to recovery.

Although nitrous oxide can be beneficial as a controlled anesthetic, recreational users of the drug should be very aware of its dangers and risks when it is misused.

What is Ecstasy and What Are the Effects of Taking It with Alcohol? 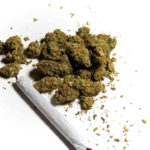 What You Should Really Know About The New Drug “Mojo”